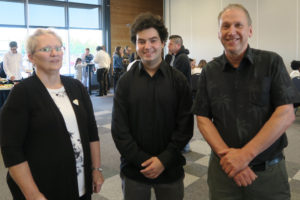 While high school was not the easiest time for him, Yannick Carroll always knew what he wanted to do in life. Seeing the work his cousin was doing training as a welder, Yannick planned to follow suit, applying to Collège Communautaire du Nouveau-Brunswick (CCNB) Péninsule Acadienne for the same program.

Right off the bat, he let Liette Sonier, NBACL’s Transition Facilitator for the Acadian Peninsula, know how he felt.

“He told me that he didn’t want to have special support in the classroom,” said Liette. “He stood up for himself and did the course in the same time as everyone else – and on top of that, he did it mostly by himself.”

While Yannick did take advantage of  some of the provided accommodations during tests and exams, along with a bit of extra tutoring, he’s  proud to say he applied himself and got real results, both in the form of praise from instructors, classmates and in his grades.

Quickly becoming friends with the rest of the class, Yannick realized there were other students with needs just like his. As a result, he felt more comfortable to ask for help when he needed it. In the end, Yannick finished the course in one year, just like his peers.

Yannick graduated June 23rd after completing a two-week practicum at Atelier PMC Shippagan, a metal fabrication plant. Now, he plans on going wherever he can get great job experience.

Proud about graduating, Yannick admits that he never would’ve thought he could accomplish what he has. He’s passionate about his work and plans to continue being independent as much as possible.
buy Bactroban generic https://rxxbuynoprescriptiononline.com over the counter

“He has a smile on his face now that he didn’t have before he started the program!” said Liette. “He’s passionate about his work, and while he knows he can always get help from me when finding a job, he says he wants to try by himself before giving me a call. He really wants to be independent.”