Home > NBACL Blog > Come work for us as a Community Animator!

Come work for us as a Community Animator!

“In your words describe inclusion”. Four faces stared in anticipation across the table at me as I pondered this question. My mind flooded with adjectives: all-encompassing, value, relationship, connection, love, participation, real contribution, supported. Eventually I uttered a mere summation of what I feel the word inclusion truly encompasses: “It means that a person has a real sense of who they are in the community and they feel that they can participate in a meaningful and valued way”.  I guess they liked my answer because I was hired to fulfill the role of Community Animator of NBACL. 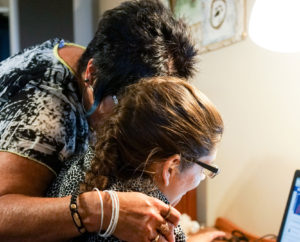 To be honest I was timid about this undertaking. Not because I didn’t think I could do the work but because I was being called upon to challenge societal assumptions about people with an intellectual disability and engage the community in supporting them and including them.  I was excited and nervous because I was finally going to be working in a job in which I could use my skills while at the same time doing meaningful work. This was my dream job!

Now that I have been in my role for some time though the word inclusion has come to mean so much more to me. As I have jumped into the work of Community Animator I have recognized just how essential inclusion is in people’s lives. People with an intellectual disability have historically been and continue to be excluded from their communities. As a Community Animator it is my role to carve out spaces and create intentional community connections for people with an intellectual disability. This means consistently bearing in mind the history of exclusion and how it continues to play out in society in the way people with an intellectual disability are perceived and how they come to be treated within their communities while also being creative about the community connections and networks I facilitate. 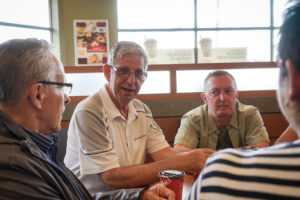 My first day on the job I was onboarding with my supervisor and she told me a story about a young man she was supporting who had just learned to take the bus. The morning began when my supervisor received a phone call from the support roommate of the young man. She said she did not know where he had gone. As it turned out he was feeling so independent about learning how to take the bus that he got on the bus early in the morning and took himself to the gym without telling anyone where he was going! Although this was worrisome due to safety concerns, my supervisor framed the event as a success for this young man and a step towards him becoming even more independent and involved in the community. Afterwards I was shown a picture of him sitting proudly at the back of the bus with his gym bag on his lap. This is when I knew I was in the right place.

Eagerly I dove into my work as I began meeting the people I would be supporting. One of my first memorable meetings was with a newcomer to Canada, Sayid. Sayid was very polite and was extremely engaged in learning more about anyone he encountered. Upon one of our first meetings he told me that, “Canada is the best country in the world”. When I began supporting Sayid he was volunteering at a local nursing home, a community connection that had been arranged by the former Community Animator. He was fascinated with the older people who lived there as he could not believe that some of them lived until they were 100 years old. Subsequently Sayid went around from one individual to another asking their age until of course he was snapped at by one of the residents! He brushed this off, smiled and continued interacting with the residents, passing out their choir books and arranging seating in the recreation hall. In this moment it was clear to me that Sayid was feeling that he was truly contributing to the lives of the residents of the nursing home and at the same time he was bringing joy to their lives.

David is another young man I support who truly benefitted from the flexibility and creativity this job offers in creating alternative spaces for people to thrive. In my role as Community Animator I assisted David to create a Personal Support Network. A personal support network is a group of people who care about a person to the extent that they will commit to being involved in the person’s life on a regular basis. Upon meeting David a few times I recognized that he truly flourished in situations that called upon him to be social. However, recently he had been offered a few different opportunities for participation in the community and had been unable to follow through on them due to transportation and some issues with communication. When I mentioned the idea of a personal support network, David was instantly intrigued. I supported David to set up the first network gathering. Although maritime weather is certainly unpredictable, especially in late April, David insisted on having his first meeting outside at a local park. I was skeptical but I pushed my cynicism to the wayside in favor of a person-centered approach. I reminded myself that it was David’s gathering and it would be held at the park if that’s where he wanted it to be held. We crafted an invitation and David sent it out to the people in his life that he felt he wanted to include in his network. 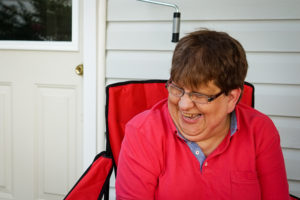 The day of the network meeting was cloudy and somewhat misty. I did phone David to inquire about the weather and to remind him to tell his network members to bring a sweater. It was David’s turn to be skeptical but he did agree to remind people to dress warm. I picked David up from his home and sure enough as we were driving towards the park the clouds opened up, the sun appeared and the temperature rose about 5 degrees. David explained that the reason he was so invested in having the meeting at the park was because he grew up in a nearby community and he used to play in the green space at that particular park. He said that it comforts him to be in that space and he noted that he felt it would be symbolic to hold his meeting there. In this moment I was reminded of the true value and importance of listening to and valuing people’s stories.

David had 7 people come to his gathering that evening. David and I co-facilitated the get together and from his perspective it was a success. Afterwards David made a joke, patting me on the shoulder, that I should just trust him about the weather next time. As a result of the meeting David and I worked together to create an online version of his network on Facebook. David has named his online network with a quirky name and every time he speaks about it he exudes pride.

One of my favorite parts of the job is when I get to be creative and facilitate unlikely connections for the individuals I support. One young man I am supporting loves the outdoors and anything to do with going on outdoor adventures. I am currently working on a connection in which he will volunteer with an outdoor kayaking company here in the Saint John community. Another unconventional connection that I currently have underway is an entrepreneurial/technology mentorship through a local organization which supports people to start their own businesses. The young man I am supporting is keen on thinking outside the box and he would like to start his own business someday. He has identified that he would like to speak to like-minded people to pick their brains about ideas pertaining to technology and entrepreneurship. Through both of these connections I have been able to foster relationships with community partners and create opportunities that are beneficial to the community, the organization and the individuals I am supporting.

Throughout my work at NBACL as the Community Animator I have been able to be flexible and creative as well as engaged in my community. I have also had the opportunity to connect with amazing individuals who have opened my eyes to what an inclusive community could and should look like. People with an  intellectual disability are valuable members of our communities and they have the ability to open our minds to what inclusion truly is and the ways they can make meaningful contributions in society. The Community Animator role is a bridge between individuals and their communities and it provides an opportunity for people to flourish when they are provided with the right opportunity.