Posted in: In the News, NBACL Blog

It is deeply concerning to me that children with disabilities are scapegoated in media coverage on inclusive education. Every time there’s a story on the inclusion model, it’s about a problem. Meanwhile, stories about kids with a disability who are successful are left untold.

I acknowledge parents’ and educators’ concerns that our children are underserved by our education system, and I don’t think anyone would disagree that supports and expertise should be increased. Where opinion differs is on what’s next. There are those who seem to support moving backward to segregated classrooms, but there are many others who want to continue the progress we have made toward inclusive classrooms.

I wonder if the naysayers understand what inclusive education is. They call it a “one size fits all” model, but it is actually the opposite. Inclusive education is about individualized education. If a child struggles to be in the classroom for a full day, there is the option of leaving or having one-on-one instruction. What’s important is that the opportunity and supports needed to return to and be included in the classroom are always there.

Some say that the inclusive education policy is not flexible enough to ensure teachers’ and students’ safety in the classroom. In my experience, when my son’s inability to self-regulate compromised someone’s safety, the inclusion policy’s flexibility assured that he had access to a separate learning space, and that his teacher was supported so that he could be included in classroom and school activities as he could tolerate.

After assessing, strategizing, and implementing a plan to best support him, we moved forward, and my son now spends most of his school day in the classroom. He says it’s easier for him to stay on task there than in his separate room. This is thanks not only to his teacher, but also to the whole school team and other professionals.

Another claim about inclusive education that I dispute is that the current model is unsustainable. For one thing, I refuse to view my son as a resource drain, as a less important student because he requires more to get through his school day. Also, children with a range of abilities learn from each other all the time. Here’s an example. When my son attended a school event with a friend, they were playing a game that they lost. Typically, due to my son’s low frustration tolerance and lagging self-regulation skills, losing would make him upset. But this time he socially referenced his friend to see how she reacted to losing. She just moved on, and so did he! This was the first time we’d noted him doing this, and we believe it is correlated with his spending more time in the classroom. On the flip side, my son was an early reader, so in Kindergarten and Grade 1 he was reading to his peers; in Grade 2, his advanced math skills allow him to share math strategies with his classmates. My son is not only learning from his classmates; he has something to offer them, as well.

I see inclusion working every day my son goes to school, when I sit at a team meeting and plan for his learning, when I see his teacher and resource teacher discussing his needs, and when I speak with the principal, who values my son and assures us that everyone will continue to work to ensure he thrives. I see inclusion working when my son colours envelopes for birthday party invitations for his classmates, children he wouldn’t know or be friends with had he been segregated from them. Yes, I can list a few ways the education system could be improved, but my suggestions wouldn’t be aimed at the inclusive education policy. They would be about supporting the model so that students can benefit from it. 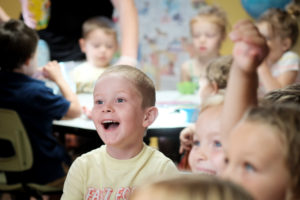 Most adults in New Brunswick grew up with segregation, so when we encounter people with disabilities, we don’t know how to interact with them or offer support, because we’ve had too little exposure to them. No wonder schools or education professionals are struggling to plan to diversity. They not only lack supports and expertise, but also experience.

Today, thanks to inclusion and diversity in our schools, children barely see difference. They just see people, and when they’re adults, they’ll be prepared for a diverse world where everyone has the right to belong. Hopefully, in 20 or 30 years debates about inclusion will be a thing of the past and schools, workplaces, and community events will be inclusive as a norm.

To achieve this, instead of splintering off into groups and segregating children based on ability, New Brunswick parents have to unite and push back against cuts that affect teaching to diversity. It’s called progress!

Kayla Wilcox and her husband have fun every day parenting their three children. The family lives in Fredericton.