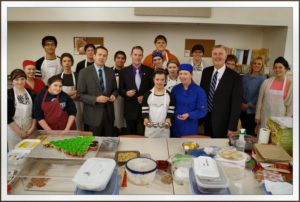 “This is a very significant honour for New Brunswick, and for Canada.”

That’s what Ken Pike, Director of Social Policy for the New Brunswick Association for Community Living (NBACL), said when he learned that New Brunswick’s Policy 322 had received a prestigious Zero Project award for innovative policy.

The Honourable Serge Rousselle, Minister of Education and Early Childhood Development, announced the award in the Legislature today. Deputy Minister John McLaughlin was slated to accept the honour during a ceremony at the UN Headquarters in Vienna, Austria this evening.

New Brunswick’s Policy 322 on Inclusive Education establishes the requirements to ensure that the province’s public schools are inclusive. It defines a system that supports all students in common learning environments, setting clear requirements for each educational authority (department, school district superintendent, school principals, etc.). It also includes procedures for the development of Personalized Learning Plans, inclusive graduation, and clear guidelines for any variation to the common learning environment. The policy was adopted in 2013 and became effective on September 17 of that year.

“We at NBACL are proud that the New Brunswick government developed Policy 322, which prompted us to nominate the policy for this very prestigious award,” says Woodill.

“The Zero Project is a global initiative that works for a world with zero barriers,” Ken Pike explains. The Project identifies and shares models that improve the daily lives and legal rights of all persons with a disability worldwide, and develops and researches social indicators that measure the implementation of the United Nations Convention on the Rights of Persons with Disabilities (UN CRPD). Having done so in 2010, Canada is now one of 160 countries to have ratified this international treaty. Article 24 of the Convention recognizes the right of persons with disabilities to an education that is inclusive and that provides for the full development of their potential.

“The selection process for Zero Project awards is very comprehensive and stringent,” says Pike. Nominations were received from over 100 countries. The nominations went through three levels of assessment that involved close to 150 experts. In the end, New Brunswick’s Policy 322 was one of 12 to receive awards for innovative policy, the only one in Canada and one of only two in North America.

The Zero Project featured Policy 322 in its 2016 report, stating that, “New Brunswick’s Inclusive Education work serves as a model for others seeking to strengthen inclusion in public schools, adding that, “In the last three years leaders in education from Québec (Canada), Spain, Switzerland, and elsewhere have visited New Brunswick schools to learn how teachers put into practice Policy 322.”

The Report further recognizes that Policy 322 “targets all children, not only those with disabilities,” an approach that was underlined by N.B. Premier Brian Gallant in his statement, featured in the Report: “Every child is important to us, and that is why we fully embrace diversity and respect in our schools.”

“It is this kind of support that places New Brunswick at the forefront in inclusive education in Canada, and around the world,” says Pike. “Since the mid-1980s, successive governments in New Brunswick have embraced and supported an inclusive philosophy and approach to education at all levels and have moved us closer towards our goal of fully inclusive education. Policy 322 is a great advancement, one that will be hopefully be followed by others in the future.”

The Zero Project Award is not the only recognition the province has received for its accomplishments in inclusive education. In 2013 New Brunswick was the recipient of the UNESCO/Emir Jaber al-Ahmad alJaber al-Sabah Prize to Promote Quality Education for Persons with Intellectual Disabilities.